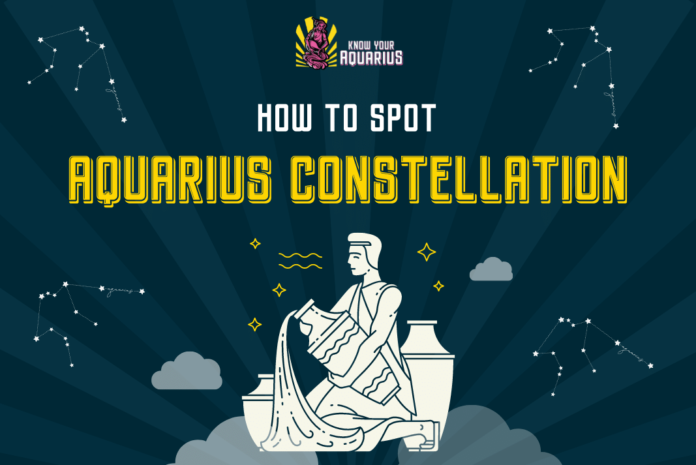 Figuring out constellations in the night sky is fun. It’s a great activity you can do with your family and friends while campaigning. You can also impress others by having the knowledge of constellations.

Let’s see how we can find the Aquarius constellation!!

How to find the Aquarius constellation in the night sky?

From here, the difficult part starts, due to the lack of recognizable features of this constellation, it’s difficult to see from the naked eye. But with the help of the following points, you can easily recognize the constellation ‘Aquarius’.

1. Night Sky and Dark Sky will Help You Out

Cloudy weather will act as your enemy if you want to see the Constellations. And on the other hand, clear skies and dark night sky will be the Key to your mission of finding ‘Aquarius Constellation’. Due to city lights which is also referred to as ‘Light Pollution’, it creates an effect and makes the visibility of many stars dim.

2. Do You Know About ‘zodiac Ecliptic’?

Ecliptic is an imaginary line from which the Sun passes throughout the year. With the help of the ecliptic, we can figure out all the 12 Zodiac Constellations. So our foremost step is how we can locate the ecliptic.

We can find it through an app on our phone, but there’s no fun in it. If you want to experience the fun and mystery while searching for ecliptic, then here are some steps with the help of which you can find ecliptic.

3. Capricornus Will Make It Easy

One of the tricks to find the difficult constellation in the sky is to look for its neighbour.

In the case of Aquarius, we will look for Capricornus. Once you find the ecliptic, Capricornus is easy to recognize. It has a very recognizable boomerang/triangle shape. It contains brighter stars with an ecliptic plane passing right through it.

The History And Mythology Of The Aquarius Star Constellation

Aquarius is the eleventh zodiac sign. Many perceptions have been made for this air sign. During the 2nd Century AD, it was first recorded by Ptolemy, but it was earlier referred to in Babylonian star catalog as the “Great One”.

This constellation is considered the ‘Overflowing Urn’ by Babylonians, which merged with torrential rains in the eleventh month of the year. And if we talk about Egyptians, they viewed it as Hapi, i.e. Neil’s deity.

In another event,  there was a handsome young man named ‘Ganymede’, son of a gardenia. As per Greek mythology, the Trojan prince once herded sheep. As Zeus, King of Gods, descended like an eagle. The young man’s beauty captivated him and attracted him. Ganymede was to be taken to Mount Olympus where the Greek Gods live.

Thus, he seized him with his claws and brought him back to Mount Olympus. He then became the cupbearer to the Greek Gods. Ganymede’s father, Tros, was upset when Zeus took her away from him. Thankfully, Zeus sent a messenger with some beautiful horses to make up for the loss.

Read: The Story Behind The Water Bearing Sign – Aquarius

Horses compensated for the loss of the father. His son was a cupbearer of immortals, something for which he was proud and happy. After a while, Zeus must have grown tired of Ganymedes. Aquarius became the constellation after Zeus took him to the stars, and that is how he became a constellation.

Major Stars in the Aquarius Constellation

Let’s explore some major stars in the Aquarius constellation.

Sadalsuud is the brightest star in Aquarius. It belongs to a rare class of stars, yellow supergiants. Sadalsuud has a magnitude of 2.87 and is approximately 540 light-years distant. It derives from the Arabic phrase  sa’d al-suud, meaning the “luck of lucks.”

Beta Aquarii has also occasionally been known as Lucida Fortunae Fortunaram. Its mass is six times that of the Sun, and it is believed that it is 2200 times more luminous than the Sun. The star is related to the spring season and the good fortune brought by the Sun when it rises after the winter season has passed.

Sadalmelik is a type G (yellow) supergiant, about 800 years away. It has a visible magnitude of 2.950, and it is 3000 times brighter than the Sun. It derives from the Arabic phrase which means “luck of the kings”.

Skat is the third brightest star in Aquarius Which is derived from the Arabic language, meaning leg or shin. It has a magnitude of 3.269 and is approximately 160 light-years distant.

It is believed to be a member of the Ursa Major Moving Group (Collinder 285), an association of stars that includes the most prestigious stars of Ursa Major.

Sadachbia, Gamma Aquarii is a binary star with a magnitude of 3.84, and approximately it is 158 light-years distant. It is derived from the Arabic phrase, which means “luck of the homes” (tents).

Sadaltager is located at the centre of the water jar asterism with a magnitude of 4.42 and is 103 light-years distant. It is derived from the Arabic expression meaning “luck of the merchant”.

R Aquarii has approximately a magnitude of 7.69 and is apparently 600 light-years distant. It is notable for being a notable star.

Following are the Deep-Sky Objects in Aquarius

Finding an Aquarius constellation may be a bit difficult to find. But after going through this article, you’ll definitely be able to find it and will be able to show it to your friends and family. It’s time to shine!!