The Science Behind Aquarius and Capricorn Compatibility 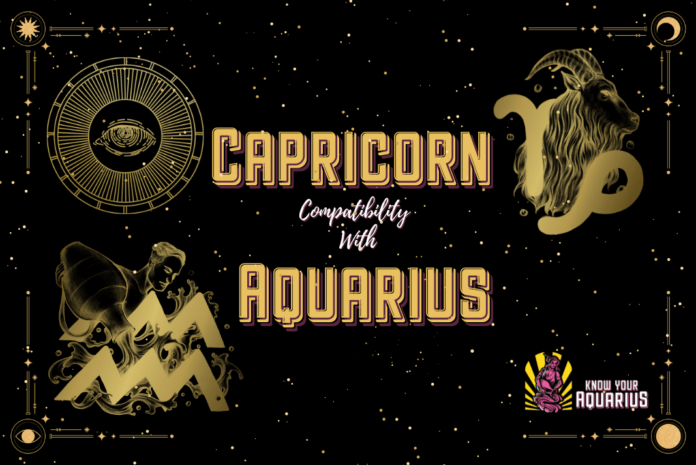 A Capricorn is one who is focused on ambition, perseverance, and has a love for the practical. These traits make them compatible with Aquarius because they are idealistic dreamers who also have a strong sense of pragmatism.

Let’s analyze them from different perspectives and check Aquarius and Capricorn compatibility in detail!!

Love and Intimacy Compatibility Between Aquarius and Capricorn

Both these signs have different elements making them have different paces in their sex lives too. Capricorn is more into traditional and restricting ways, whereas Aquarius is more into experimenting and exploring. Restrictions can be a bit frustrating for an Aquarius. They don’t like being bound. They love things done in haste.

However, a Capricorn might not appreciate that. They would want their partner to be patient, which is not something an Aquarius has or will be willing to do. Still, if they do things in their own way, it can end up being pretty disastrous. In order to avoid this, they should instead have a sort of peace between the pace they might want to go in.

Again, it should not be one-sided. Both the partners should be cautious of each other’s wants and should try to keep a middle ground.

How Do Emotions Play Out In Their Relationship?

When it comes to emotions, both Capricorn and Aquarius are known to be not such emotional people. They are more into logic and intelligence and might often detach themselves from others. They may not prioritize their emotions over their goals and needs; this makes them seem selfish even though they might be just looking out for themselves.

They also tend to seek comfort and assurance from their partners. This may lead these two signs to not have emotional bonds among them. They will just expect care from one another without considering that they too need to show their care. This may lead them to be distant both emotionally and mentally.

However, they can overcome this if they work on it and showcase their love for each other. It need not be in a cheesy way, and the Capricorn might hate it! But in a more practical and heartwarming way!

Are They Close On An Intellectual Level?

Aquarius is known for their intellectual minds; they love to free their minds and create visions of the future for themselves. They are indeed very progressive and would love to let loose. When it comes to Capricorn, they are known for their practicality. They think logically and make decisions based on it. They set boundaries for themselves so that they can be grounded in reality.

Due to such different perspectives on leading life, they may not work well. An Aquarius’ unexpected action may catch a Capricorn off guard. They may consider Aquarius’ way of working to be out of the world and weird!!

Breaking Down The Trust Compatibility Between Aquarius and Capricorn

Trust is one of the most common and important factors in one’s relationship. Many relationships break just because the partners don’t have enough trust in each other. Trust between an Aquarius and Capricorn is interesting. Being straightforward people, Aquarius won’t back down from a discussion, and Capricorn, fearless of confrontation, won’t back down from one either. This way, both will be able to talk about their issues and eventually build trust within them.

Capricorn is more towards practicality and value boundaries. They may firmly believe that these boundaries will keep them on a safer side and face to face with reality. This is exactly the opposite of what Aquarius thinks!! They worship freedom and would love to fly high being free. They don’t enjoy restrictions and would fight against them. Capricorns are more likely to keep themselves according to norms and live their lives as ordinary people.

Even though their major values differ from each other, their minor ones are the same. They both value loyalty and consistency. They would highly appreciate it if their partners were faithful towards them and would not hide or do something behind their backs.

Do They Enjoy Each Other’s Company Through Activities?

Both these signs are known to have high energies but, despite that, their choice of activities may differ from each other. They might have to compromise a bit when they have to do something together. An Aquarius should make sure not to insist their partner do something and try to slow down their pace, whereas a Capricorn should make sure not to deny and set boundaries as it may not be much fun and frustrating for their partner.

How Do Aquarius and Capricorn Get Along?

Due to their different personalities, there is a high chance they may not find each other interesting. They can start their relationship being friends after amending themselves in accordance with one another.

However, they have to work extra hard to take their bond from friendship to love relationship. They are not your most compatible signs when it comes to zodiacs. But feelings are something that no one has to hold on to. When you strongly feel for someone, you will make sure to work hard and put in your efforts in order to keep your relationship alive.

If both Aquarius and Capricorn partners strongly feel for each other, then by making necessary adjustments, they can surely work!!

1) Are Aquarius and Capricorn an ideal match?

According to zodiacs, Aquarius and Capricorn are not your typical compatible couple. However, if they work hard on their relationship, they can stay together for a long time.

2) How Friendly Can They Both Get?

Aquarius and Capricorn as friends are a big thumbs up!! Their respect for each other will hold a foundation for their friendship. Capricorn will admire Aquarius’ intellect and broad-mindedness, and Aquarius will love Capricorn’s dedicated and determined selves.

However, there is a very small chance for it to become something more than friendship, and if it does, both might have to put in a lot of effort to make it work.

3) Is There Any Communication Between Aquarius and Capricorn?

Differences in ideologies and perspectives create problems in their communication, leading them to have arguments often. However, they can be great friends if they consider each other’s plus points. Their communication can lead them to see certain things from different points of view. It can be pretty intriguing for both of them. These differences can lead to them being friends pretty quickly. However, they may take a long time to convert that friendship into something more. They may have to put in a lot of effort to make that work!

Teertha Shettyhttps://knowyouraquarius.com
Hey! I am Teertha Shetty. A 20-year-old student residing in Mangalore, India. I love sharing my thoughts and feelings by writing. I also enjoy reading poetry and am always up for interesting stories and content!
RELATED ARTICLES
Compatibility